We all know how important it is to invest in a good quality microphone when you’re recording a podcast.

Of all the brands available, it’s Shure that has gained popularity over the years, creating excellent microphones that deliver the best quality sound possible.

Two of Shure’s standout microphones are the SM48 and the SM58.

Both of these are ideal for recording vocals, which is perfect for podcasting, and both come with a variety of other features that place them amongst the best sound recording equipment you’ll ever find.

But what is the difference between these two microphones? And which is the better choice for your podcasting needs?

We decided to face them off against each other in an SM48 VS. SM58 battle to answer these questions! We’ll look at each of their features and their designs.

We’ll also take a look at why each of these microphones is so good for vocal recording while removing any confusing technical jargon along the way.

So, if you’ve been wondering whether the Shure SM48 or the Shure SM58 is the right choice for you, keep reading, and you’ll soon have a definitive answer.

Before we dive into each microphone’s features, let’s take a moment to look at the overall design.

Both the Shure SM48 and Shure SM58 are practically identical in appearance, with the only physical difference being an additional indented ring around the SM48’s body.

Both microphones are built from enamel-coated metal, which ensures extreme durability.

This means that they’ll be able to withstand the occasional bump in the studio and makes them much less susceptible to damage when out on the road.

The condenser capsule situated within the microphone’s head is well protected by a steel mesh grille, enhancing the durability of both the SM48 and SM58 even further.

It’s also worth noting that both microphones are dynamic mics, and these aren’t only renowned for their durability, but they also don’t require any additional power to function.

Meaning you don’t have to worry about keeping a stash of batteries close at hand or recharging. Instead, you can plug your microphone into your audio interface, and you’re ready to go!

Shure SM48-LC Cardioid Dynamic Vocal Microphone Latest Pricing At Amazon
Some links to other sites might be affiliate links so we earn a commission at no extra cost to you. 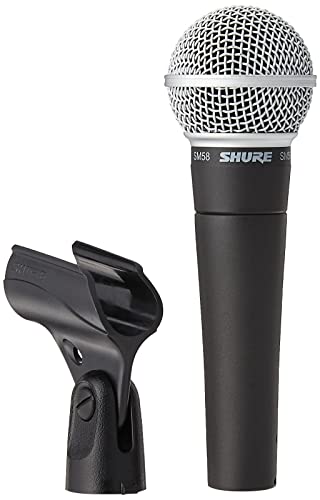 Shure SM58-CN Cardioid Dynamic Vocal Microphone with 25' XLR Cable Latest Pricing At Amazon
Some links to other sites might be affiliate links so we earn a commission at no extra cost to you.

Both the Shure SM48 and the SM58 operate with a cardioid polar pickup pattern. This is ideal when you’re recording vocals, as the microphone will only concentrate on the sound that is coming from a 180º arc directly in front of it.

By doing this, it eliminates any ambient noise from appearing on your recording. This makes each of these microphones ideal for studio recording and outdoor recording.

One thing you’ll need to remember, however, is that if you’re planning on mic-sharing for an interview, you’ll both need to be sitting within the same 180º arc in front of the microphone.

In terms of which is better in this respect, they are equally matched.

Since both the SM48 and SM58 use the same cardioid polar pickup pattern, there’s no real contest between them, and both will focus on vocals while blocking out background noise.

The wider a microphone’s frequency response is, the greater the number of frequencies it’s able to pick up.

It is imperative when looking for a microphone for vocals, as different vocal tones hit different frequencies. You’ll want every voice you record to sound as natural as possible.

This is another area where both the Shure SM48 and SM58 shine through at the top of their class. There is a little difference between the two here, though.

There isn’t a lot in it, and the SM48 is still more than capable of producing mid and low-range sounds as well as a smooth bass.

However, if you’re looking for those warm, conversational tones that will give an accurate, natural voice-replication, then the SM58 comes out as the winner here.

The extended frequency range of the SM58 also means it sounds a little brighter in the treble regions, so it’s beneficial for a podcast host with naturally lower vocal tones.

One of the standout features both the Shure SM48 and SM58 offer is a built-in pop filter. This is super useful for many reasons, the foremost being that it reduces the risk of plosive sounds from appearing on your recording.

This means that those words that require harsh pronunciation (letters such as d, p, k, and t) will sound smooth and less abrasive on your finished audio.

A pop filter also helps to prevent any breath sounds from appearing on your recording, so it’s ideal if you’re trying to build some suspense with moments of complete silence.

The other reason this built-in pop filter is so useful is that it saves you some money! Unlike most other microphones, you won’t need to worry about investing in external accessories to keep plosives off your recording.

However, it is worth noting that the built-in pop filter’s performance on the SM58 is superior to that on the SM48 when used outdoors, as wind-noise proved to be an issue.

If you decide that the SM48 is the best microphone for you, it would be worth investing in an external pop filter if you plan on recording outdoors.

The impedance of your microphone is an essential factor as it measures the AV voltage resistance and, ultimately, controls the audio signal’s flow. If the impedance level is too low, you’ll end up with distorted sound.

Both the Shure SM48 and SM58 microphones are tied here as the winner, as each of them has an impedance of 150ohms.

This means that, regardless of how long the cable is between your microphone and your audio interface or speaker, the audio signal will continue to be strong, and your sound will be continually high-quality.

The Shure SM48 and the Shure SM58 both have a standard 3-pin XLR connection point. This helps ensure that a secure connection is established at all times, and it’s much harder to accidentally tug out of place than a modern USB port.

The connection point is also conveniently located directly on the bottom of the microphone. This helps to keep the cable out of the way when it’s in use.

So, whether you’re mounting the microphone into a stand or going handheld, you’ll always feel as though you’ve got unrestricted movement.

Again, there isn’t a real winner between the two here. Both microphones feature the same connection port, and both as equally as effective as each other.

There is a difference between the Shure SM48 and SM58 when it comes to pricing. The SM48 is the cheaper of the two, so it would be a better option for anybody with a limited budget.

It’s also a good choice if you’re new to podcasting or sound recording and want a good but inexpensive microphone to find your feet.

Why is the SM58 more expensive than the SM48, though? Generally speaking, the sound quality is a little better, and the built-in pop filter’s performance seems to work more effectively than the SM48’s.

The Shure SM58 also has a broader frequency response range than the SM48, so, as we’ve explained earlier, it’s able to transform a more comprehensive range of voice types into natural-sounding tones.

This makes it a better choice for podcasts with an interview or panel show format.

Picking an overall winner between the SM48 and the SM58 isn’t an easy task as both are relatively evenly matched in features and specification.

To determine which one is best, we need to look at what you need your microphone to achieve for you and your podcast format.

If you’re the host of a solo podcast, then the SM48 would be the better option.

This is because it has a slightly narrower frequency range than the SM58 and, since you won’t be interviewing other people, you don’t need to worry as much about converting different vocal tones.

Comparatively, the SM58 would be a better choice of microphone for co-hosted or interview podcasts. Again, this is due to the wider frequency range.

The built-in pop filter on the SM58 is a little more effective, too, though, so it’s a good choice if you’re narrating an audiobook or recording outdoors.

Think about your available budget, too. The SM48 is generally around half the price of the SM58, which makes it a better choice for someone looking for an inexpensive option.

This doesn’t necessarily mean it’s less effective than the SM58, though, and the SM48 will still be able to produce high-quality audio and achieve things that most other budget microphones cannot.

Whichever microphone you choose, one thing is for sure – you’ll be blown away by the quality of your recordings. You’ll probably wonder how you even managed without a Shure microphone before!