In a world of “disruptors”, The Athletic is changing how sports fans keep up to date with their favorite teams.

If you’re a sports fan, you’ve probably heard of, or seen the Athletic mentioned before. Hell, your favorite writer is probably working there these days.  But, you may still wonder if the Athletic is worth the subscription fee. After all, we’re not used to paying for online content, especially podcasts.

If you don’t want to read the entire review or just want a quick summary, here are the key points from this article.

You get the best national writers, along with local experts, so you can read on topics that impact the whole league, or just your favorite team.

Value for Money: ✔️✔️✔️✔️
While we’re not used to paying for online sports content, the Athletic isn’t too expensive. Realistically, it’s less per month than a sports magazine or the daily newspaper. All of their great podcasts are also add-free on the platform.

Quality: ✔️✔️✔️✔️✔️
The quality of the work that the Athletic produces is second to none. By not focusing on click-bait articles and simple game recaps, they let the best sportswriters do what they do best.

Ease of use: ✔️✔️✔️✔️✔️
The site and app are intuitive to use, and you can even follow your favorite writers, leagues, and teams so your feed is customized to your likings.

What could be improved

Price:
The price for the Athletic starts at $4.99 a month, but with our discount code, you’ll save 40% and only pay $2.99 a month. There’s even a free trial so you can try it out for yourself.

What Is the Athletic?

The Athletic promises to be a one-stop-shop for serious sports fans, offering the best articles and podcasts from the best writers and podcasters in the business. 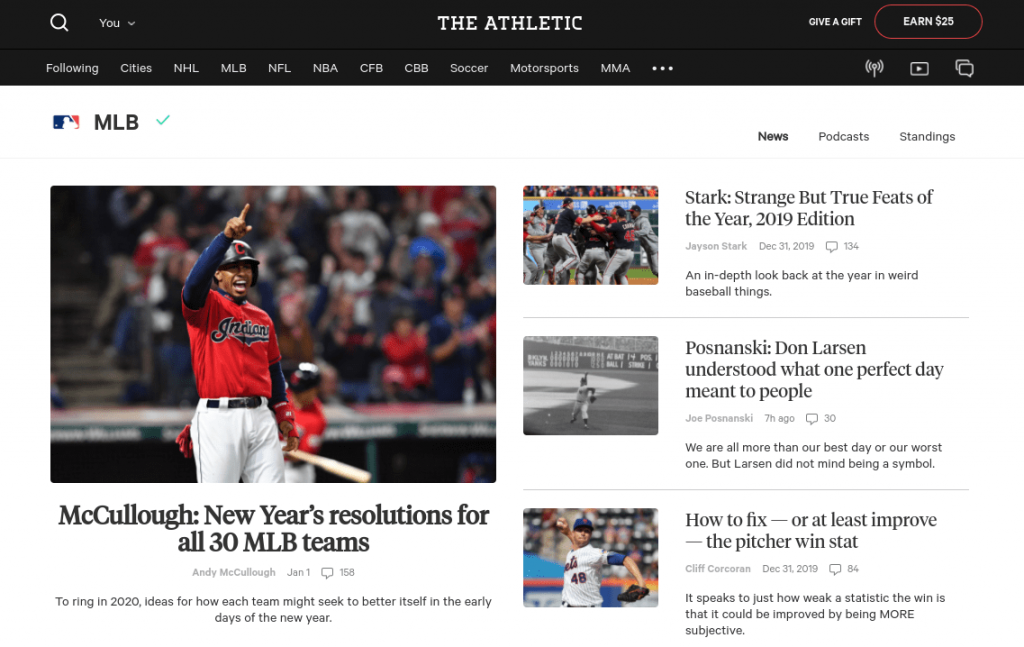 While the Athletic is relatively new, only starting in 2016, they’ve wasted no time and quickly turned into one of the biggest power hitters in sports journalism.

Now, the Athletic boasts some of the best sportswriters and podcasters in the game, then let them have a lot of autonomy in what they work on. So, that means that you won’t get any annoying three-line articles that just aggregate other people’s stories or tell you who is missing tonight’s game.

For your subscription fee, you’ll get:

Who is this Athletic for?

The Athletic is for the hard-core sports fan. While your average person who has a passing interest in sports will still get a few benefits from the Athletic. For example, their game recaps and box scores are always handy to check on the app when you’re out and about.

However, the real target market is that hardcore local sports fan who loves in-depth analysis and already consumes the content; they read the sites, listen to the podcasts and reads the sports pages of their local newspaper.

How Much does The Athletic Subscription Cost?

The Athletic has two payment methods for most of the public (there’s also a student discount, which we’ll talk about later). These come in a monthly or annual subscription fee.

For starters, you can pay by the month with no lock-in contract for $9.99 a month. Or, you can pay for the whole year upfront for around half the price. 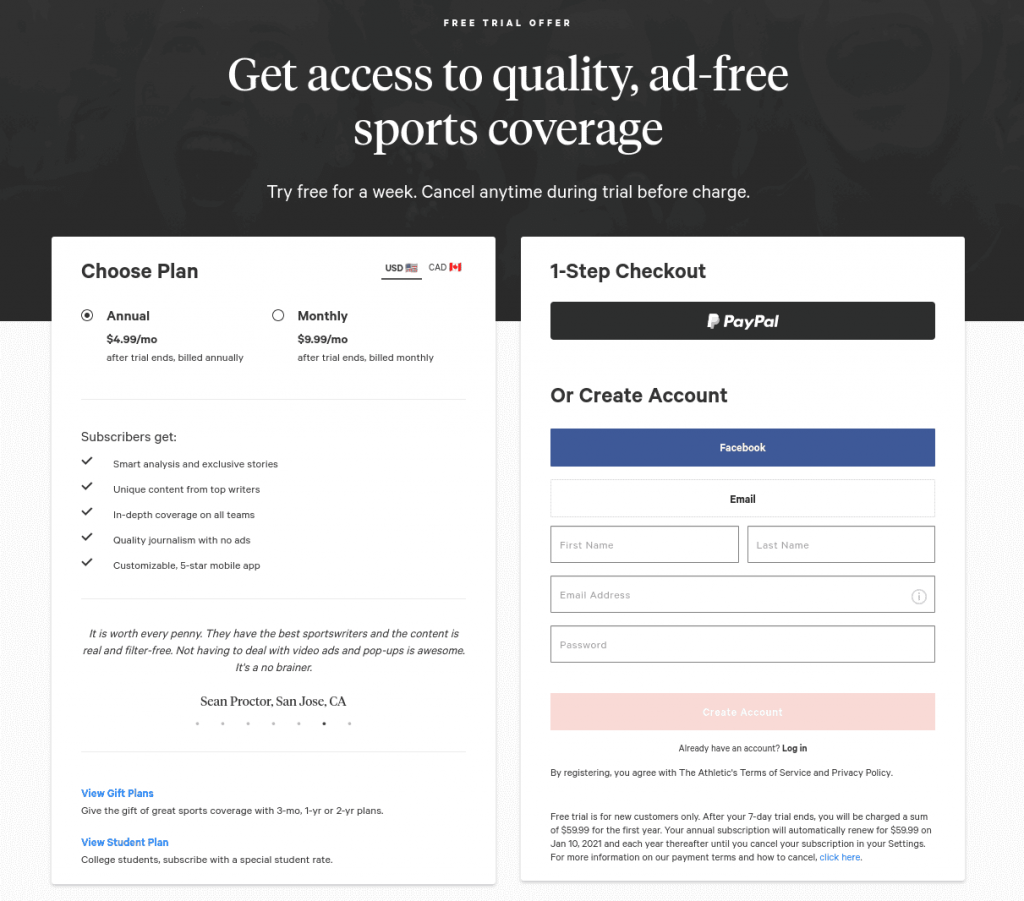 Does the Athletic Have a Student Discount?

Yep, if you’re a student with an academic email address, you can get your subscription for up to four years for the super-cheap price of $29.99 a year.

Now, keep in mind that you have to validate your university or school email when subscribing.

Can I Gift a Subscription of the Athletic?

If you’re looking at giving a subscription to The Athletic as a gift, then you’re in luck. The Athletic makes it easy to give the gift of quality sports journalism. All you have to do is follow the simple prompts.

You can gift either a three-month, one-year, or two-year subscription.

The Athletic Discount Code: Save 40%

As we mentioned before, a regular subscription to the Athletic will cost at least $4.99 a month which is still great value for money.

However, with our discount code, you’ll save 40% on your subscription and can sign up for as little as $2.99 a month! You can click any of our links to get your discount code.

Exclusive Articles From the Best Writers

The main selling point of the Athletic is that you get the best work from the best writers in sports.

The Athletic gives their writers the scope to write about what they believe is important. This strategy leads to some incredible articles. We know writers from The Athletic to break some of the biggest stories in sports, including the Houston Astros sign-stealing saga in 2019 which was picked up by everyone including the New York Times.

You can even follow your particular American or Canadian city and follow all the sports happenings from there. So, if I was from Atlanta, I could follow their page and get all the best local knowledge on the Hawks, the Falcons, the Braves and the local colleges.

The Athletic has included podcasts to their content options, and they have impressed me with what’s on offer.

Obviously, there are some great free podcasts out there already, but the Athletic has done a great job of bringing some of their bigger names to the platform.

Their podcast selection is growing at a super-fast rate, and while you can listen on most players for free, the subscription version is completely ad-free.

Note: The podcasts from the Athletic are available on all podcast players, but with ads.

One thing that the Athletic can improve on is their podcast player. While it works fine, they don’t have a playlist option. So, if you want to listen to a few different podcasts in one sitting, it can be annoying to click out and find the next one. I’d much rather just pre-add all the new episodes to my playlist and go from there.

Another thing I didn’t love about the podcasts when they first started (although it seems to have died down now), is that a lot of the talk was about how good the Athletic is… We know, we’re already customers. However, that seems to have mellowed as of late.

The app for the Athletic has access to all the content, the podcasts and box scores for games, making it easier to keep track of the events of the day.

The app and site are both intuitive to use and looks kinda like any regular old sports site… only way better!

How to Get the Most out Your Athletic Subscription

You’re probably thinking that with all that content on the Athletic, how do you sort through all the stuff you don’t want to read?

Well, with the ‘follow’ function on the Athletic, you can control your feed to only show what you’re interested in.

You’re given the option to follow leagues, teams, cities and specific writers. When you do, your feed will be filled with what you like, so you only see the articles and podcasts that you’re interested in.

For me, customizing your feed is a must and really optimizes the user experience.

Alternatives to the Athletic

With alternatives to the Athletic, there isn’t really another platform that offers the same experience. That’s kinda the main selling point for the program!

All writers for the Athletic have their work exclusive to the platform, so you can’t read the full articles anywhere else.

However, alternatives would be to read the free sites online or your local newspapers.

Here are some frequently asked questions about the Athletic

Basically, ‘free’ online content sites make their money through online ads, or, like on ESPN, drive people to other purchases to source revenue.

However, the ads that used to make money, are no longer a way to stay profitable. Even popular stories for large online sites may only generate $75 or $100 in revenue. That much money can’t pay a writer for a whole day’s work, let alone add in an editor, or any other costs associated with a large company producing content.

To compensate for this, most free sites are limiting coverage, dropping their standards, or laying off writers and hiring free interns.

Basically, as the New York Times and other leading retailers have shown, getting the best-written content will have to be on a subscription level. Which, when you think about it, is no different from the days where magazines and newspapers were the only way to read about your favorite sports.

Who writes for the athletic?

The Athletic has over 300 writers on their books, with over some of the biggest writers in every major sport.

Is the Athletic only in America?

The Athletic is mainly an American site, however, you can join from all over the world. There is also a .uk version of The Athletic that has a focus on the English market. However, I’m a huge soccer fan too and haven’t found anything on the .uk version that isn’t on the US version.

Is the athletic app free?

The Athletic app is not free to use, other than the seven-day free trial for all Athletic users. However, there is no added cost to using the app once you’re subscribed.

How many athletic subscribers are there?

There are nearly a million subscribers to the Athletic and the number is constantly growing.

How do I cancel my athletic subscription?

If you have tried the free trial and don’t want to continue, here are the steps to cancel your subscription.

Conclusion: Is the Athletic Worth It?

If you’re a serious sports fan, then the Athletic subscription is definitely worth it. You’ll find that there’s a bunch of great content that’s exclusive from the best writers. However, I couldn’t see a casual fan that only wants to know the scores and who is or isn’t playing, getting their money’s worth.

Also, if you’re only a fan of one particular team, I’d definitely make sure that your team is covered, otherwise, you must limit yourself to the national pieces. But, if you’re a fan of one of the bigger sports in one of the major leagues, then odds are your team will already be covered.

The best part is that the Athletic has a free trial, so you can try it for yourself before paying.