Among all the microphones you can use to create the excellent sound quality needed for podcasting, there are two that are the most revered among professionals and amateurs alike. They are the NT USB and the .

But what makes them the best? They are quite different from each other after all, so how can you be confident that one is going to be better for your podcast than the other? To answer these questions and give you a better idea of the differences between the two, let’s dig into the specifications and features that make them both world-class podcasting microphones.

Let’s begin by looking at what each has to offer individually. 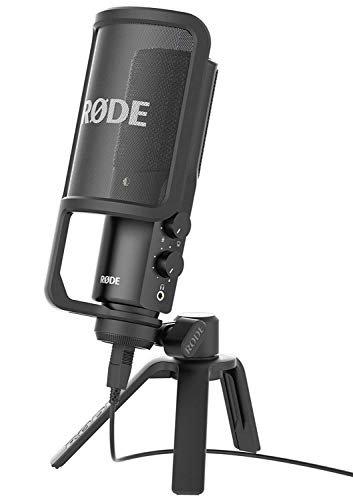 Rode NT-USB Versatile Studio-Quality USB Cardioid Condenser Microphone Latest Pricing At Amazon
Some links to other sites might be affiliate links so we earn a commission at no extra cost to you.

Let’s start with the NT USB. Right off the bat, you’ll probably be more familiar with the brand and its reputation for making some of the best sound recording equipment around. The creation of the NT USB has helped to push the company’s reputation for excellence even further.

The NT USB is built with a condenser transducer, which is often the preferred style for podcasting because it tends to give a much more natural sound when recording vocals. It has a cardioid pattern that works across a 180º arc directly in front of it, meaning it picks up less ambient background noise to muddy the vocal.

It’s easy to use, connecting to an audio interface or mixer through the USB port, while the 3.5mm stereo headphone jack gives you the ability to perform zero-latency monitoring. Podcasters – in fact, anyone who uses microphones a lot – will know that’s always a great extra feature to find.

There are two sets of controls built into the NT USB, one for volume adjustment and one for direct mix control between the microphone input and the source output. That gives you a choice. To hear what’s coming from your computer, or only what’s mic fed.

A pop filter comes with this microphone, which is a useful additional accessory. Pop filters help produce clear vocals by removing any noise created by intakes of breath or the ‘popping’ noises that can come from pronouncing certain letters. The first ‘P’ in ‘Pop’ is an example because you push air out when you pronounce it, and without a filter, that can block out your sound for a second.

The NT USB also comes with a tripod desk stand, which is especially useful for podcasting when you need your microphone to stay as steady as possible. You also have the option to use the included ring mount to keep it in place. Meanwhile, the 6m USB cable will allow you some flexibility over the setup of your studio.

One thing the NT USB doesn’t have is a gain dial built into it. It isn’t too much of an issue, though, since you’ll still be able to adjust your sound levels from your computer. That works perfectly well; it’s just not as convenient as being able to do it directly from the microphone itself.

What’s in the box?

Blue Yeti USB Mic for Recording & Streaming on PC and Mac Latest Pricing At Amazon
Some links to other sites might be affiliate links so we earn a commission at no extra cost to you.

Blue Microphones is another world-renowned brand, famous for creating high quality recording equipment. The Blue Yeti USB condenser microphone is another addition to the company’s arsenal of impressive creations.

The USB Plug & Play connectivity of this microphone makes it incredibly easy to install and use with an audio interface or mixer. Alternatively, you can plug it directly into your podcasting laptop and use it with your preferred recording program.

It works with both Windows and Mac OS, giving you the flexibility to switch between computers without needing to buy a separate system-compatible microphone.

This microphone is also incredibly versatile and features a total of four (yes, four!) different pickup patterns. You can switch between cardioid, omnidirectional, bidirectional, and stereo. That gives you the flexibility to record in a variety of ways using just one microphone, rather than needing a space-consuming (not to mention expensive) setup of multiple microphones.

So no matter what the theme of your podcast is, or how many guests you’re featuring at a time, this microphone can handle your requirements.

Unlike the NT USB, the Blue Yeti does feature a gain control dial that will allow you to easily and quickly adjust your levels directly from the microphone. It also has a volume control dial and a zero-latency headphone jack on the bottom. There’s even a mute button that lets you cut out your mic without needing to switch it off altogether.

As with the , though, has a sturdy build, thanks to its metal construction, and it comes with a 2-year warranty. You can also choose from a variety of colors, to inject some personality into your podcasting gear, or give your studio that extra finishing touch.

If there’s a downside to the , it’s the fact that it isn’t sold with a range of accessories, as the NT USB does. However, it does feature a desk stand that is already attached to the microphone, which arguably makes it sturdier than a removable stand.

While they don’t come as part of the package, though, the does have a range of accessories, sold separately. And the fact you’ll be able to record in four different pickup patterns with just one mic will save you enough money that you’ll be able to afford a few.

What’s in the box?

Which Is Better For Podcasting?

As you can see, each microphone comes with a set of unique features that separates it from the other, and the easiest way to decide which of these two microphones is better for podcasting is to assess the format of your podcast itself.

Let’s look at the most critical factors you need in a podcasting microphone and how those factors might steer you towards either the or the NT USB.

Most podcasting microphones give you the option to choose between either a cardioid or an omnidirectional pickup pattern. The has changed the game. Instead, it gives you the ability to switch between four different patterns, including both cardioid and omnidirectional.

The NT USB only offers you the capability to record with a cardioid pickup, which is often the preferred method among podcasters. That said, it can be limiting, especially if you intend to grow your show or have multiple guests on at once.

To decide whether the or the NT USB is the best choice for your podcast, you need to understand what each pickup means for sound quality.

An omnidirectional microphone works across a 360º arc and picks up vocals coming from different directions. It also has a low-frequency response, so it will be able to make vocals sound clearer while reducing background noise.

Cardioid patterns work across a 180º arc and focus more on vocals coming from directly in front of the microphone, which simultaneously blocks out background noise.

So, if your podcast has a lot of guests or co-hosts, the and its multiple pickup patterns would be the best choice for you. If you’re a solo host or tend to have only one guest on at a time, then the NT USB would be a better choice for your podcasting needs.

Most of the time, you’ll use your computer for the majority of your audio level adjustments. But having the ability to quickly make a change to the sound quality while you’re recording can be incredibly useful.

These are features that are straightforward to use and are helpful to have once you’ve hit the record button.

More built-in control options are found on the . A gain dial gives you the flexibility to adjust your sound levels and avoid distortion directly from the microphone, which can make your editing a lot easier.

The also has a mute button, which is a useful feature for podcasts with multiple guests. The mute function means you can cut off the feed from your mic without needing to adjust any levels or switch it off. If things get controversial or heated, it’s easier to mute the mic live than it is to cut any unwanted material during your edit.

One feature that the NT USB and the have in common is that they use a USB connection to attach to your computer, audio interface, or mixer. That makes them a lot more universally compatible across different operating systems such as Windows and MAC and gives you the convenience of a simple Plug & Play installation.

One area in which the comes up short is in the accessories that come with it. It does have a desk stand to which the microphone is attached, but little more. Meanwhile, the NT USB includes several extras that help improve the quality of your sound recording as part of the initial layout, rather than making you buy them separately.

One of the most useful accessories included with the NT USB is a pop filter. That can be used to remove any breathing sounds or sharp intakes of air, as well as reducing the ‘popping’ effect that comes with the pronunciation of certain letters. It leaves your vocals sounding crisp, concise, and much more appealing to listen to.

The NT USB also includes a tripod desk stand that will help to keep your microphone firmly in place. Unlike the , this stand can be removed and replaced with the included ring mount instead, giving you more versatility over where you place your mic.

However, one trump card that the has over the NT USB is the variety of colors in which you can get it. Sure, this doesn’t bring you any advantage in terms of performance, but it’s always fun to inject a little personality into your studio.

Both the NT USB and the are excellent microphones for podcasting, and ultimately the choice you make will come down to what you and your podcast’s format required.

Generally speaking, if you’re starting on your podcast journey, or for smaller established podcasts with no more than two people on the mic, go with the NT USB. Its simplicity, cardioid pickup pattern and the value you get from the included accessories make it suitable for your needs.

More extensive operations, professional studios, and podcasts that have multiple hosts and guests – grab yourselves a Blue Yeti. The option to switch between four different pickup patterns and the variety of built-in controls will give you the flexibility to record in several ways without having to change equipment. It will also give you more control over the sound quality while you’re recording, making editing a lot easier.